Twickenham Rowing Club was founded in 1860 and is one of the oldest and largest rowing clubs in London. Our unique position on London’s most beautiful stretch of the Thames makes TwRC an idyllic place to row.

We have a reputation as a friendly, sociable and welcoming club that caters for rowers of all ages and levels of experience. We are currently benefiting from sustained growth in membership and our ever-stronger senior squads cater for professionals with demanding careers who also want to race at Henley.

Louis Philippe I was elected King of the French in 1830, but in 1848 he sought exile in England, living here as Comte de Neuilly until his death in 1850.  There were six sons and four daughters by his marriage to Marie Amelie. In 1864, York House, Twickenham, became the family home until the turn of the century.

Philippe I's fifth son was Henri, Duc D'Aumale (1822 - 1897) and the Club's first President from 1860 to 1897. Born at the Palais Royal in Paris, he was brought up by his parents with great simplicity, he was educated at the college of Henri IV.

At the very young age of 8, he inherited a fortune of 66 million livres (approximately £200 million today), the lands and wealth of his godfather, Louis VI Henri de Bourbon-Condé, the last prince de Condé. Henri also inherited the famous Château de Chantilly, domaines of Saint-Leu, Taverny, Enghien, Montmorency and Mortefontaine. He also gained the Châteaud'Écouen. At the age of seventeen he entered the army with the rank of a captain of infantry.

He distinguished himself during the French invasion of Algeria and, in 1847, he became lieutenant-general and was appointed Governor-General of Algeria, a position he held from September 27, 1847 to February 24, 1848.

In this capacity he received the submission of the emir Abdel Kadir, in December 1847. After the Revolution of 1848, he retired to England and busied himself with historical and military studies, replying in 1861 by a Letter upon History of France to Napoleon III's violent attacks upon the House of Orléans.

On the outbreak of the Franco-Prussian War, he volunteered for service in the French army but his offer was declined. Elected deputy for the Oise département, he returned to France, and succeeded to the fauteuil of the comte Montalembert in the FrenchAcademy. In March 1872 he resumed his place in the army as Général de division and, in 1873, presided over the court-martial which condemned Marshal Bazaine to death.

At this time, having been appointed commander of the VII Army Corps at Besançon, he retired from political life and, in 1879, became inspector-general of the army. The act of exception, passed in 1883, deprived all members of families that had reigned in France of their military positions. Consequently, the duc d'Aumale was placed on the unemployed supernumerary list.

Subsequently, in 1886, another law was promulgated which expelled from French territory the heads of former reigning families and provided that, henceforward, all members of those families should be disqualified for any public position or function and election to any public body. The duc d'Aumale protested energetically but was nonetheless expelled.

By his will of the June 3, 1884, however, he had bequeathed to the Institute of France his Chantilly estate, including the Château de Chantilly, with all the art-collection he had collected there, to become a museum. This generosity led the government to withdraw the decree of exile and the duke returned to France in 1889. He died in Zucco, Sicily and was buried in Dreux, in the chapel of the Orléans.

Aumale's eldest brother was Ferdinard, Duc D'Orleans, who died in an accident in 1842.  He was succeeded by his elder son, Philippe VII, Comte de Paris (1838 - 1894), who was the donor of the Club's freehold land in 1876.  The Comte de Paris was a figure of some political importance.  On the death of the Comte de Chambord in 1883, he became King Philippe VII, pretender to the French throne. 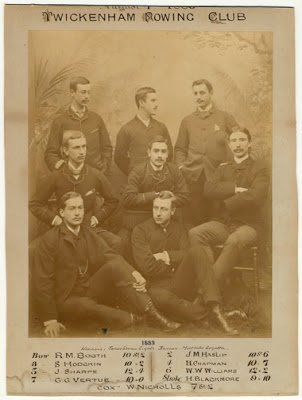 Twickenham Rowing Club was founded on 26th July 186 and is jointly (with Thames RC) the third oldest of the rowing clubs on the Thames.

The first boathouse was built in 1861/62 as a floating structure and was moored at some point off Twickenham Ait (Eel Pie Island).  It cost £295 and was fully paid for out of ordinary income, by 1866.

Eel Pie Island was earlier called Twickenham Ait and before that The Parish Ait.  Earlier the island was actually three aits.  In 1889 it was proposed to build a bridge to the island but that didn't happen until 1957.

In 1864 arrangements were made with the Twickenham Literary Society whereby their Reading Room in King Street could be used as a clubroom by members.  By March 1866 the boathouse contained:


The boathouse was then damaged by ice, and sank.  On its repair in 1866/67 fenders were fitted to ward off ice and a bathroom provided.

In 1870/71 a Dressing Room for members was hired at George Colless Inn for a rental of £17 per annum.  Later they moved to the Queens Head at £15 per annum.

Early in the winter of 1872/73 a severe storm caused the boathouse to sink again and it remained submerged for some months before repairs could be made.

In 1876 when the Club became the owners of its present site, the boathouse was put ashore and was finally sold in 1882/83 for £32.  The Thames Conservancy provided the ballast to raise the ground level where it rested.

In April 1876 the Hon. Treasurer, C.J.Millett wrote to members informing them that H.R.H. Le Comte de Paris had generously presented the Club with the freehold of a piece of ground on Twickenham Eyot, the conveyance being subject to an unexpired lease.  It would be necessary for the Club to treat with the Lessee for a surrender.  The Lessee was E.A.Bowen with a 21 year lease granted on 1st July 1865 at a rental of two pounds and ten shillings per annum.

A Deed of Gift dated 6th August 1876 between W.M.Coulthurst and H.L.Antrobus (Partners in Coutts & Co, Bankers and Trustees of the Orleans family interests) formally conveyed the land to the Trustees of the Twickenham Rowing Club, subject to the unexpired lease.  Those first Club Trustees were C.D.Millett, B.T.White and R.M.Thrupp, and they and their successors have absolute discretion as to the holding of the property or to its sale for the benefit of the Club as they deem fit and proper.

On 12th March 1877 a Special Committee was set up to consider plans for a new boathouse having on estimated cost of £600. For various reasons some two years were to pass before matters were finalised.

On 4th December 1878, E.A.Bowen surrendered his lease of the ground so giving the Club unencumbered title and by March 1880 the Committee considered that sufficient funds were in hand, together with a £300 mortgage to commence building.

The afternoon of Saturday 13th March 1880 saw Mrs.Powell, wife of the Hon.Secretary performing the ceremony of driving the first of the 39 piles of the new building with some of the leading members assisting at the windlass.  The Architect was W.T.Mann, Essex Street, Strand and the Contractors C.Saunders & Son of Shepherds Bush, the cost £855. In 1882/83 a Lean-to was added for the housing of members' private boats, and a cesspool was constructed, total cost £95. 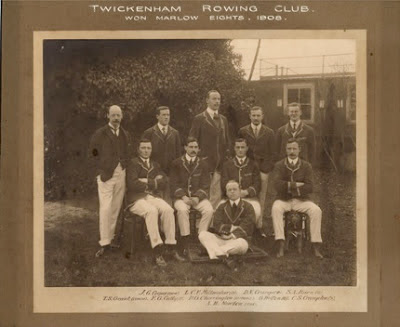 During these years the major changes to the boathouse and its facilities have been:

This was the largest single development of the Clubhouse since its construction in 1884 and was funded by grants from: British Rowing, The Mayors Fund, Viridor, City Bridge Trust, loans from Hampton Fuel Allottment and by loans, donations and fundraising by Club Members.